These could fly for hundreds of miles and, armed with a local map, could hit targets with pinpoint accuracy. They were known as 'intelligent weapons' and cost millions to make. I have my doubts about the intelligence angle both from the weapon's perspective and the owner as evidenced by:

' . . .that's right, yes there's the railway line. Now then, left at the Hilton, third exit at the roundabout, straight on for 5 km (passing Oddbins on the right). Immediately before Tesco at the traffic lights turn sharp left and enter the large red brick building via the 4th window from the left on the ground floor and explode. EXPLODE? HEY JUST HANG ON A DARN MIN -' 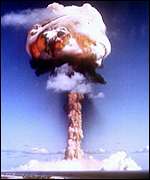 'Please design an advanced sophisticated autonomous system that can navigate itself halfway around the world on its own without a passport or any biometric data and blow itself up on a sixpence. Budget = billions. Unit cost = millions. (If budget becomes an issue we can divert a bit more from Health and Social Security.)

It was not long before pilots disappeared from frontline combat aircraft, crew from MBT (main battle tanks) and sailors from many warships. Initially many robotic weapons were only semi-autonomous (they hardly thought for themselves at all), or were under direct human remote control. However it was not long before  new specifications crept more and more towards fully autonomous robotic weapons that could go off on missions entirely on their own. In many cases the residual human military presence on the battlefield just became a liability. And thus was born the MILITARIBOT.