Back to current Thinkblog

'SPINELESS MUPPETS IN BLAZERS!' yelled GAT at the TV after video footage proved yet another dreadful error by officials in the Robofoot World Cup.

Coming in for most abuse was World Robofoot president Self Flatter who apparently believes huge errors by officials are an integral part of the game, and sends a strong message that clear miscarriages of justice in sport help people develop realistic expectations of excluding clear-cut evidence from legal cases in the real world.

'Whether the ball was in the net or not is irrelevant, it's what the official in charge believes that is the truth. I don't care if 5 billion TV viewers conclude that we're incompetent buffoons'.

Dear GAT,
Time is ticking away and only 3 weeks to go for the TOGAF 90 Course for practitioners by Togbot (TOGAF and ISEB Certified) in London from 12th July To 15th July 2015.

If you have not blocked seat(s), then hurry up and register on or before 28th June 2015 as only 7 seats are left with the discounted price of Globo 14,590.

GAT's summary of above: 'What the hell is TOGAF? Strangely, I have not blocked seats and rushed to register 'cos only 7 seats are left. They will not be hearing from me soon.'

Filton, Europa -- (BUSINESS WIRE) -- Golbalot.Corp. (LASHDAQ-100), a supplier of advanced robotic equipment and related automated technologies for the global robotics industry, today announced it had completed its purchase of Greece and was making a bid for Spain.

'We are pleased with this purchase,' commented Graham Cracker, CEO of Globolbat, 'which will make for a lovely meeting destination for Globalbot executives in the summer months. The planned purchase of Spain will complement our portfolio by adding some further exciting beach destinations as well as some half-decent Robofoot teams such as Unreal Madroid and Borgalona, who will sit well alongside our Greek acquisition Olympiakobotos'

'It is a major step forward in operational efficiency to acquire an entire country on a simple purchase order,' commented Duwkits, Director of Operations at Globalbot, 'In the past one could only purchase robotic components and various odds and ends. Even the CAPEX [capital expenditure] route would not have enabled this just 2 or 3 years ago.'

'The company is now assessing the feasibility of holding other European and South American countries in inventory', added GAT, Director of Engineering, 'Having them available via a simple stores requisition would be the ultimate goal, but we have take care not to repeat the unfortunate events that led to the scrapping of Iceland.'

Safe Harbor: Safe harbors are plentiful in Greece. Nice sheltered bays with lovely warm clear water. Some days it is possible to swim with dolphins. The place is riddled with ancient ruins and outstanding seafood restaurants. We feel it is very unlikely to suffer a scrappage outcome like Iceland, which is covered in ice and volcanoes.  Normally safe harbor statements cast doubt on the veracity of the information within a press release but, on this occasion, the authors believe everything they've written.

Not on a sinking ship, trapped in a mine, or sweating on a doomed aircraft?

Percy Knell announced there might be a pay rise soon, and it might be 4%, but the again it might not. In fact, what he meant was that a year ago someone decided we might get a pay rise sometime in the future, and it might be around 4% or, more accurately, 'anything up to 4%'. Well, 0% is 'up to 4%' quipped one engineer and another speculated up to 4% could mean a hefty pay cut since all real numbers <0% are up to 4%.

So, someone asked, no one will get more than 4%?

'Look' continued Percy, 'forget the 4%, that was just something decided a year ago so it's not really relevant any more. All I can say is that we hoping to have a general pay review and it may be more or less than a certain figure that may be about 4% depending who you are.' 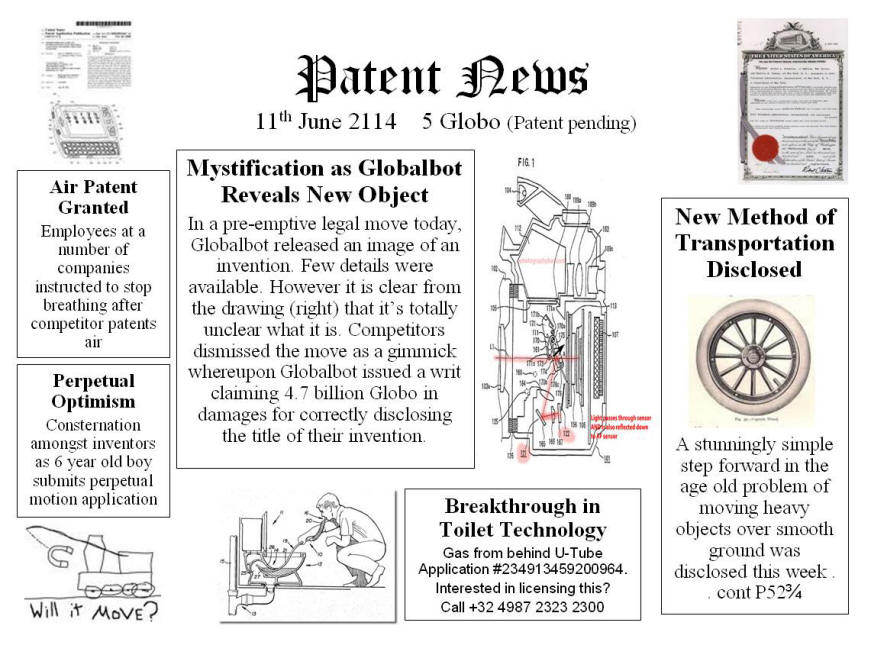 Encountered someone today who brought a new depth and richness to the concept of the 'yes man'. I was in a conference call which included Graham Cracker - the CEO of Globalbot no less.

'Just keep your trap shut!' was GAT's helpful advice as to my participation (or otherwise) in the call.

There was someone on the call who followed everything Cracker said with, 'I absolutely totally agree', although he may have said 'I totally absolutely agree' on one occasion.

After a while, it got a bit wearing, and GAT was sure Cracker (with whom he has a passing acquaintance) was showing signs of irritation.

He un-muted the phone and interjected, 'Mr Cracker, Sir, may I suggest you consider the option of a gender change?'

Accompanied Gerald on a trip to purchase some grass seed. As usual, there was too much choice!

TB's angle: Like covering the shed? Good for jungle training,

TB's angle: Dangerous grass - will grow like the clappers even when planted by total imbecile. Rips up concrete within days. Best kept in the packet.

UniGrass™ - in a word: 'ideal' - suitable for dogs and children.

TB's angle: Well, there are not many products that are suitable for dogs and children, except maybe custard creams, so I guess it's got that going for it.

WimpGrass™ - for that perfect English lawn.

TB's angle: The sort of grass that could not possibly have evolved. Dies instantly unless owner waters and weeds and feeds it four times a day. Forget dodgy fossils, grass like this should be the centrepiece of any creationist case.

TB's angle: Saves the bother of killing it yourself.

When asked to define the customer priority order for targeting sales of Globalbot's recently released CLEARBOT ™ problem-solving algorithm, the answer from Marketing seemed to be the order in which they could remember them.

I am sorry to inform you that Gerald has recently expressed the opinion that he'd never share a residence with anyone who wore a scarf and has now been branded a 'scarfist'.

Sorry about the blogout dear reader(s), but Globalbot got audited. An Executive Summary of the findings are replicated below:

1. Globalbot spends a lot of money, an awful lot.

3. Whether it receives more that it spends is a moot point, nobody knows.

4. We are suspicious that Globalbot may have some debts, possibly huge ones, but nobody knows that for sure either.

5. It also has a mind-boggling collection of assets, but they're spread all over the site and no one seems to have a list. Anyway we just ticked 'Comply' and moved on.

1. The lead auditor left partway through the audit to become a surf instructor.

1. The bank may notice eventually.

Once again it is time for all staff to tick boxes. There shall be no exceptions and, although there is no connection whatsoever between successfully completing the box-ticking exercise and salary increases, let me make it clear that no box ticking means no salary increase. The process is as follows:

7. Manager +1 meets with line manager and reviews all the ticked boxes they can find on the form.

8. Line manager meets with employee and explains the box ticking done by him/her and manager+1 and also the employee's ticked boxes to ensure the boxes ticked make sense.

Note: Employee has right of appeal to manager +2 for any box ticking disputes.

Please note that with immediate effect all managers on grades UL3c-UL1a inclusive have been replaced by a spreadsheet. The main drivers for this decision are that spreadsheets:

1. are a much more reliable location to store data

2. can add up, subtract and perform many other useful functions

3. are capable of instant decision making

If you formerly answered to a manager on any of the above grades then the spreadsheet will be in touch with you shortly to establish a macro specific to you job function.

Rumours are now flying around that Percy himself will shortly be replaced by an avatar, and some other senior managers with a random number generator.

I'm going to file a patent. It solves the problem of cooling data servers that consume vast amounts of energy storing useless data. The original idea is to relocate the data onto a prior art invention called paper and then store the paper in suitable zero-energy consumption cabinets.

Budget review time! Where I learned:

Why the salary section of Sales Group is always left blank, to quote Steve Ales:

'Ha, ha, no, no, Can't possibly have sales salaries in the public domain!'

And how Marketing cope with a measly 6,000,000 Globo monthly travel budget.

'It's quite straightforward,' said Mark Eting, the Globalbot Marketing Director, 'For items we are okay with we use green, and for the ones that need further clarification we use amber.'

'What about things we can't comply with?' asked GAT

'I'm not sure what you mean.' replied Mark.

'Well, aren't some things customers ask for going to be red?' 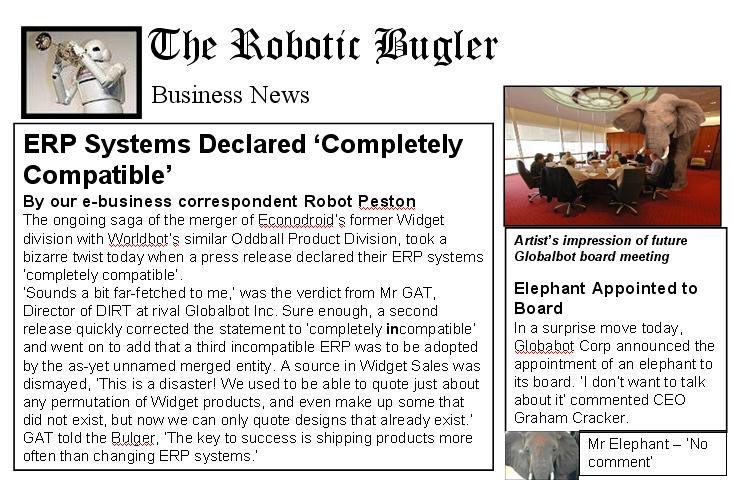 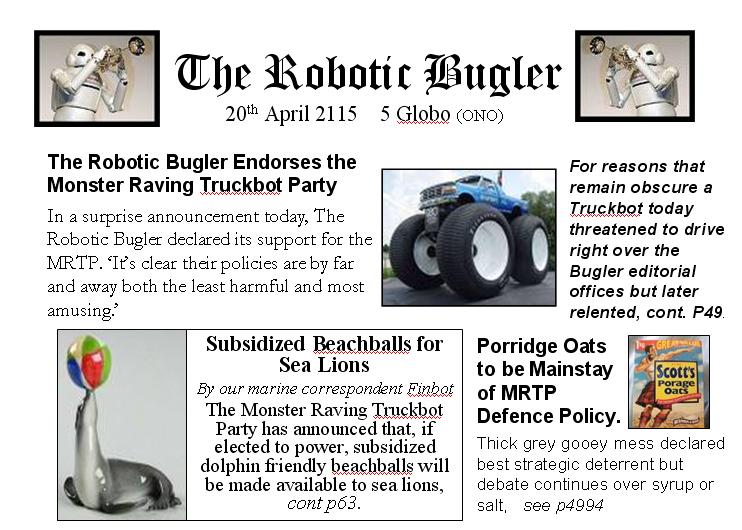 And now, we have the manifesto for the:

We pledge to reduce taxes

We pledge to eliminate death

We pledge to develop a network of carbon-neutral teleportation gateways

We pledge to arm our defence forces with unimaginable firepower

Trust us, we know what we're doing, honest!

Green is our favourite colour

We pledge to make everything much better and lower taxes! 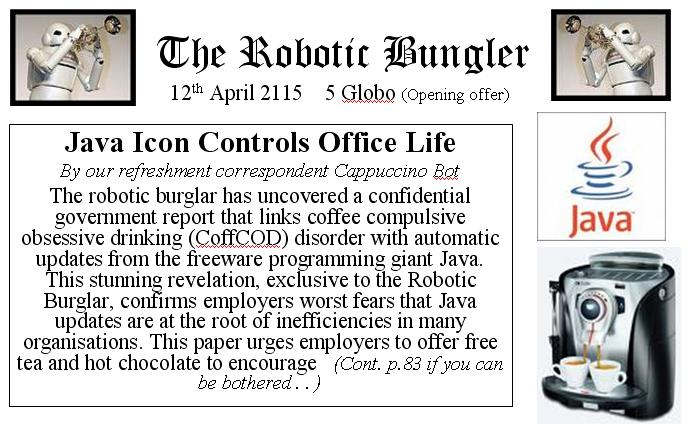 'Globalbot is like a snake that's just eaten a large animal - it's just going to lie there emitting greenhouse gases.'

More gems from the world of TINFOE™ ERP PLM.

TINFOE™ ERP PLM is a Single Version of the Truth

Claim referred to the Philosophy Department of Bristol University.

Initial prognosis: 'What is truth?'

(The department acknowledges the kind permission from the estate of the late Pontius Pilate.)

Moves design from CAD to obsolescence without any human input

The bug in Version 5.SP5.6.7 that scrapped the entire inventory of several large corporations has now been fixed.

Could you please check in the drawers of your desk for any dessert spoons you may have borrowed from the canteen.  Globalbot Catering will not be able to offer dessert in the future without them.

Hmmm . . . this raises a host of questions not the least of which are:

1. Why would anyone borrow a dessert spoon? Are their other sources of desserts at Globalbot?

2. Why on earth would a robot borrow a dessert spoon at all?

3. Why would people (& robots) keep said dessert spoons in their desk drawers?

4. Is there an implied conspiracy that robots have pilfered the spoons to prevent their human colleagues from partaking of desserts?

5. Perhaps with the goal in mind of eliminating desserts altogether?

6. Why can't Globalbot catering simply limit the dessert offering to those compatible with forks?

7. It appears Globalbot desserts are able to time travel into the future as long as there are dessert spoons in the present. 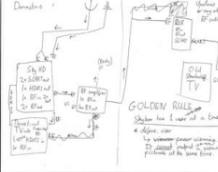 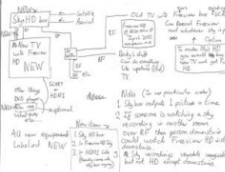 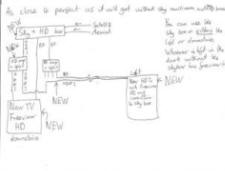 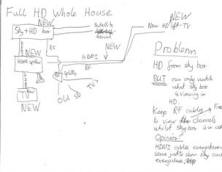 After yet another cock-up where GAT recorded 3 hours of cooking programmes instead of the Grand Prix and only found out after hours of trying to get it to play back on the TV in the loft, Gerald drew out some simple hook up and user instructions, 'It's just so easy Dad! Any idiot can do it.'

'Where's the bit about how to keep the pigeon off the satellite dish?'