Back to current Thinkblog

Overheard a sad conversation today. Helen was talking to her sister on the phone.

'Yes, the curse of addiction. I guess I just have to support him as much as possible.'

'And he's taking pictures as he goes along.' Helen was close to tears.

And what, I hear you ask, is this terrible socially blighted habit GAT suffers from? Drugs, drink, compulsive pole-dancing?

'Given our current incoming shortage list exceeds 6,000,000 parts, this is nothing short of a miracle,' commented P Unchbag, Globalbot International Spares Co-ordinator, 'and it may be several weeks or even months before another one turns up. Frankly, I don't think I can survive another tour of our key accounts. '

Industry analysts have been tracking the situation for some time as desperate users of Globalbot robots sought alternative sources of supply such as stealing bits from each other, or improvising with Lego Technic, Mechano or parts from model trainsets.

Duwkits, Head of Manufacturing Operations at Globalbot made his position clear, 'No one's having any of my parts!'

Safe Harbor: This press release may give the reader Globalbot is experiencing difficulty supplying spare parts; this may or may not be entirely due to the absence of spare parts in stock, which in turn is linked to the observed fact that nothing ever turns up in Goods In, which in itself may or may not be related to the huge pile of unpaid invoices in the corner of accounts, the implication of which is that 'cash' and 'flow' have become disparate concepts within the current Globalbot entity. 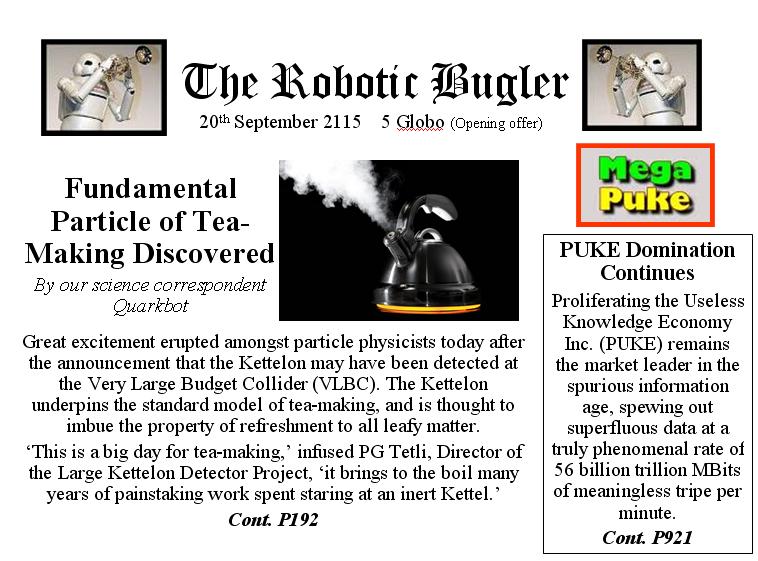 Today, I merely offer you Gerald's recent post from the world of student socks:

After the great amount of interest in my previous sock post here follows the official sock audit. If you have been tagged it is because of your initial interest in this project, I am very grateful as I could not have completed this great task had it not been for people who have taken their valuable time to express an interest. Note it does not include counts of any socks MiA which includes socks which have been vapourised, decapitated, lost in the wash, left behind or dissolved in rain. I would estimate this number to be ~20 socks. Please feel free to take a moment to remember these valiant marchers.

Finally 2 socks that aren't mine and are odd.

Summary: 23 pairs of socks (after odd pairings) 11 in holes, and 2 that I don't own leaving no odd ones.

I got upgraded to the latest Unibot release and now I get messages as above right in the middle of my field of vision every time I do ANYTHNG!!

I tried composing a letter of complaint to Pyschosoft, but my vision kept coming up with:

Time taken on completion to ascertain it contained errors: 0.18 seconds. 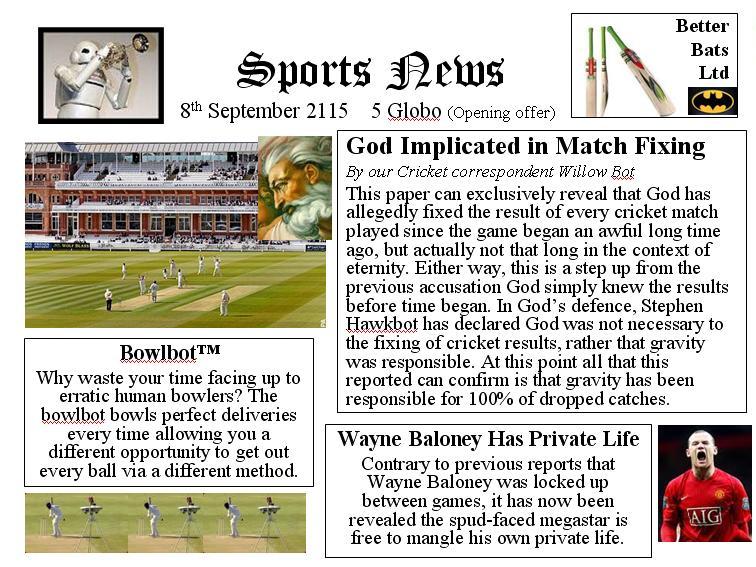 'What? I didn't know that,' commented Graham Cracker, CEO of Golboblat, 'Who told you that?'

GAT, DIRT Engineering director added, 'We operate in a state of continuous confusion anyway, so progressing to a state of perpetual confusion just came naturally to us.'

Industry experts are divided over the significance of this development, some thinking it matters, others not, and yet more not taking the slightest interest. It is likely that competitors will ignore this development unless they don't, in which case they might try and licence the concept in spite of a lack of clarity on what, exactly, Globalbot intend to confuse on a perpetual basis.

Safe Harbor: Some of the information above is correct and some isn't, nobody seems to know. There may be some facts, but then again maybe not. Anyway, I wouldn't trust it either way. Globalbot corporate announcements and 'pinch of salt' should be deemed as related entities at all times. 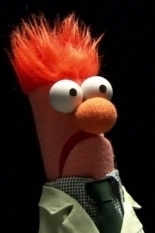 GAT in mild to serious trouble, yet again, after entering in TroubleNET™ the root cause of a long-running robot reliability problem as 'The customer is a Muppet!'

Oh dear, the pains of two weeks out of the writhing Globalbot e-loop nexus of banality.

'And, of which, 2,145 are instantly deletable and another 326 are only of interest to e-historians.' added GAT.

The prize for the most relevant email of the lot was, strangely, went to a SPAM entry:

3. DO NOT OPEN ANY EMAIL

4. 'Highlight' all in inbox

6. Sit in sunshine with good book and glass of wine

7. On receipt of angry phone calls from colleagues, deny you speak English.

And that's a narrow boat, not a long boat (GAT told some friends he was off on holiday on a longboat - now that would be different: rape & pillage, arson, crapping over the side, big grey beards).

1. Carry scuba equipment at all times

2. Relocate to a property on higher ground

Great excitement in the art world as a previously unknown painting by Claude Monet: 'The Project Plan', has been put up for auction in London. 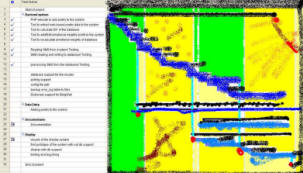 Next week: The Product Roadmap, by Pierre-Auguste Renoir

'%&*#ing TINFOE!' yelled GAT in the middle of a test run on our thrilling new ERP system TINFOE® which is due to replace the current CRIPEL ORIBAL™ any second.

'You need an IQ of 300 to figure out the configurator.'

It didn't start well when his first attempt to build a configurator opened with the question:

'Would you like to add a glove puppet to each robot build? Y / N'

Then he thought he'd configured:

But the simulated outcome indicated:

Someone noticed today that the purchase authority approval routings on ORIBAL™ had unexpectedly and spontaneously lapsed and engineers were free to order anything they fancied.

'Quick!' cried Doom, 'Order a battleship and see if one turns up.'

Apparently someone called 'TY' has joined the Globalbot board as a prelude to Globalbot buying out Beanie Babybot Inc and merging it with its Toybot division.

'It's bad news for toddlers,' commented an industry analyst, 'It's likely there'll be an extensive rationalisation in beanie types available.'

TO: Everyone at Globalbot Filton 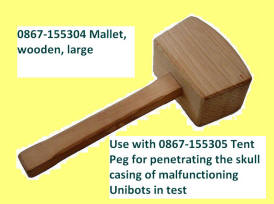 If you have taken the tool shown above, or know if its whereabouts, then please return it immediately to Manufacturing Test as we have a serious backlog of malfunctioning Unibots that's holding up critical shipments.

This is a case for Thinkbot's Detective Agency. Current theories:

1. Someone has taken it on a camping trip.

2. One of the 'malfunctioning Unibots' has pilfered it in self-defence.

3. A member of the League for Prevention of Cruelty to Unibots has removed this tool of oppression from the perpetrators and hidden it in his/her/its bottom desk drawer pending the Glorious Unibot Revolution.

4. It's been shipped somewhere and we merely have to await the 'Unexpected Wooden Mallet in Ship Kit' TroubleNET to pop up.

5. Someone has borrowed it to try and get their change out of a canteen Vendbot.

The human race is rational? Yes?

Well, get this. Someone finds a four-leafed clover and takes it as a sign some sporting event or romantic adventure is certain to succeed.

What happens when it does not work out?

Does the human just admit it was all a load of bunkum?

No, guess what? - the human assumes the clover was defective.

Merely a failure of 4-leafed clover quality control, 'Trust me to get a dud . . .' etc.

Enquiry to stores on stocking levels . . .

Thanks you for your enquiry regarding a replacement 15 Vdc power supply for your leg control drive.

This TSB is to inform your that, regretfully,  DC BOTPOWER INC. have announced a global shortage of leg control power supplies, and no units will be generally available until March 2116 at the earliest. When spares do come available, robots unable to walk at all will be supplied as a priority, followed by those with only one leg operational. Globalbot therefore sincerely hopes that the fault you are experiencing is minor, and that you are able to limp along for the next few months. Globalbot apologises for any inconvenience caused.

'Don't worry Thinkbot,' comforted Doom, 'I'll find you a bit of scrap metal to use as a crutch, or perhaps Rabbit can adapt a Hornby PSU for you.'

'Or, on the other hand, you could stand still for 8 months and get yourself up the priority list,' observed GAT. 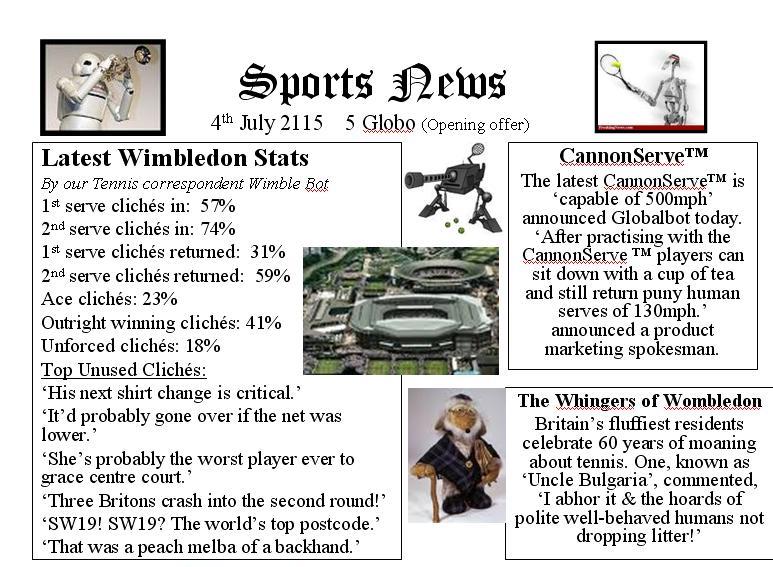