Submit your comments and photo (optional) to: thinkbot@thinkbot.co.uk

If your review is published on-line we'll be in touch so we can send you a free limited-edition 'Thinkbot Reviewer' enamel badge (And hey! The grey bits are silver in real life - it's mega-coooool, love TB): 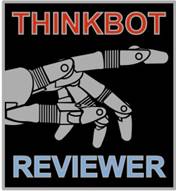 It's been a few months since I read Thinkbot but I don't think I've come across anything as enjoyable and gripping since. Wouldn't say it was just for teenagers!

Thinkbot is a very good book. I found it extremely well written with a quick storyline. It moves at a good pace and it would be a good book for youngsters aged around 13. I found the characters conflicting emotions especially interesting. I also enjoyed the connections between the RMD (Robots of Mass Destruction) and Thinkbot, and how there are certain moments of random humour, such as the brown mugs. I found the trouble Thinkbot had while trying to be human very poignant and I loved the different types of robots. Overall, it is a very thoughtful, amusing book and I would highly recommend it.

''Thinkbot' is a most brilliant book. For me it is in my top three reads along with Harry Potter and Artemis Fowl. It is a very funny book that lots of people would enjoy. I thought I was going to die laughing. I urge people to read it! I can only hope there'll be more.

Thinkbot has a whole new way of thinking about the world and the future of it. It is a funny, sad, happy, enthralling book which leaps back into your hands whenever it is time for tea or time to go out. It has something for everyone; family life, work life, and the completely, entirely and utterly unexpected, which are all equally shared out throughout the book so that one section which may not interest you as much would be followed by something which applies to you more. It shows how unreliable we are as humans and the way people could react racially to a thinking robot – they would shun him and may try to take him apart to see why he works – which you wouldn’t do to a human that is a different race to you.

I absolutely loved Thinkbot. I couldn't stop laughing. I was reading it during school, and people kept turning around and asking what in the world I was reading because I was trying really hard not to laugh out loud and was making a strange fizzing noise. It kept me in suspense as well, I had no idea what was going to happen at the end, even when I only had a little bit left. Part of the book ( which I will not specify because I don't want to be one of those horrible reviewers who gives away the ending) totally had me fooled and left me stricken. I hope everyone who reads this book across the pond enjoys it as much as I did.
Lydia (USA), Age 15, Knoxville TN, USA

Thinkbot by David Tossell is an amazingly written book that combines so many themes I would be surprised if it does not grab you in some way. It combines family life, work, and your average Joe with world politics, wars and poverty. The link between both the worlds? Thinkbot, the world’s first thinking robot. The result of combined industry botched jobs will soon tackle world issues. If you look like the picture then you should read this book, if not then read it anyway! Guaranteed, something about Thinkbot will grab you and you won’t be able to put it down!

This book left me in stitches. But it's not merely a comedy - it's a sharp satire into the things that make up our 21st century society. Man's dependence on unreliable technology, industrial chaos, lurking military might, terrorism, distrust between nations, self-interest, family pressures. I found the storyline carried me along effortlessly and I did not want it to end.

Wrenched my son away from his computer game long enough to submit this open-mouthed expression of wonderment!!!   I am on page 90 of enjoyment and left warmth of heat and coffee and comfort of sofa and swam to surface of Thinkbot long enough to say, "Wow."

This is simply spectacularly good.  Gotta go finish.....others are nibbling at my heels.  (Can barely go to bathroom without my husband sneaking a look even under strict orders not to touch in my absence.)

The relationship of Thinkbot with his 'family' is tremendous, with its delicate balance of tension and subtle, well-placed humor.

President Hedge is such a dumbo, I can't help seeing Bush in my mind's eye. I mean how did someone that dumb end up in charge of a superpower?

I thoroughly enjoyed this book and it seems to have captured peoples imaginations. You have created a new genre - PoliSciTeen or PST for short. As I said I did thoroughly enjoy the journey and now I have passed it on to my teenage son.

The bit about shipping software to the wrong army still makes me laugh now when I think about it. It's just too real - just the sort of daft thing the company I work for would do. A robot having a teenage tantrum because it had no chair to sit on also makes me smile.

I have read your life story so far, and it was not an unenjoyable story.  You haven't not packed much into your non-unthinking life so far, I hope the rest of your unrobot existence proves not to be as unexciting!

Every teenager should read this book! Thinkbot is a teenager and views the world like one.

What's this book doing on the Sci-Fi shelves? It's a comedy.

How can a book get away with mixing weapons of mass destruction with humour? Well this one does. It's funny and poignant at the same time, as well as being a romping good yarn.

This book presses all the right buttons: family life, high-tech chaos, Europe and USA, a strong lead character, terrorism, robot football, military action scenes, laugh-out-loud humour,  yet at times it certainly touches a nerve. It has an element of protest as well.

I read Thinkbot in two days flat! I could not put it down.

Terrific! Once you start you just can't stop.

Submit your comments and photo (optional) to: thinkbot@thinkbot.co.uk

And don't forget the badge! 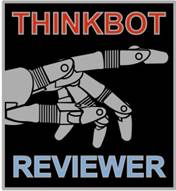